More custom requests have been filing in, with miraculously workable timing. Do you all get together behind my back and sort yourselves out, or am I just this lucky to maintain a lovely, nearly constant stream of requests? Either way, I'll take it!

Here's a look at what I've been up to lately. 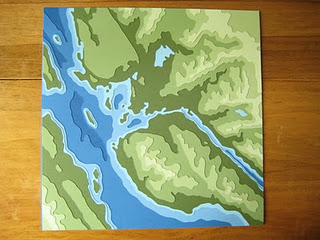 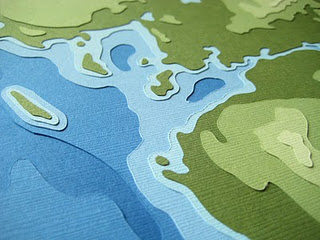 This piece shows one of the few times that I used the darkest color for the land as the base layer, instead of working the four shades the other way. I think the effect works really well since the land closest to the ocean here is rich with giant evergreens, and just up the steep sides of these mountains are glaciers and snow caps. I also really like the greater contrast between the light blue of the water and the dark green of the land. Might have to try this with my next few Islands pieces.

Next up, warm and sunny, Sanibel Island in southwest Florida: 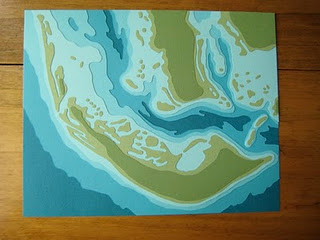 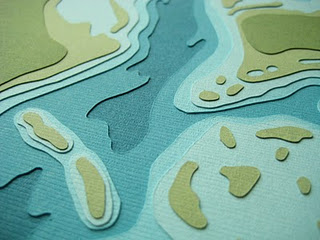 Because the topography is very subtle here and much of the island is marshy wetland, the buyer and I agreed that just two layers of green would suffice to represent the land in this area. I chose the middle of the Grass Green set for a nice, true-green tone with good contrast to those gulf coast waters. With all the little islands and lakes, I don't think we missed the other two layers.

Back up north, this time on the eastern side of the country, I had another request for the Finger Lakes region of upstate New York. This time, I was asked to recreate the land's topography as well as the lake depths. It was fairly crucial to be as accurate as I could be as the buyer and her friend participated in a thigh-busting, 300-mile bike ride up and down this terrain, and these pieces were to be souvenirs of that event. It took a few tries, and quite a bit of back-and-forth communication, but I think we did O.K. in the end, and I'm very grateful for the patience and flexibility of this buyer. These pieces aren't the winners, but they'll give you a good idea of the project and all those lovely hills. 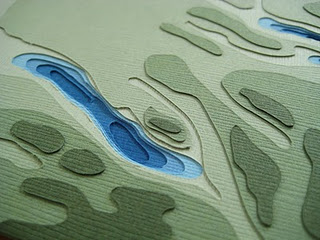 Staying in New York, but moving to the big city, I recreated a section of Manhattan's Upper West Side, along the Hudson River, and across from the Fairview area. 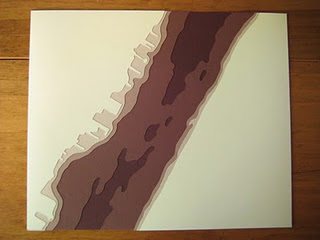 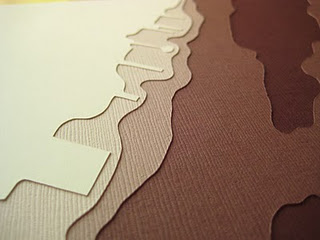 It's a wonderfully simple piece with quiet sophistication, done up in creamy browns. I like how the river, at a distance, could almost be mistaken for a piece of bark, then the fabricated piers on the west bank reveal that it is something else entirely, and perhaps, to a keen observer, give away its true location identity.

What fun stuff you guys throw at me, and what a great way to "travel" the world. Thank you!

I love the way it looks with the green and blue together.

SO INCREDIBLE!!!!
I love all of them--how incredibly talented you are! The Upper west Side piece is truly inspirational and the Florida piece looks like my my home. I have been thinking about one for me ;) This cinches it! I'm going to have to get in line.
Finger Lakes & Alaska--wow. So beautiful and so articulate. So impressed, Marnie. Thanks for sharing this work on your blog.