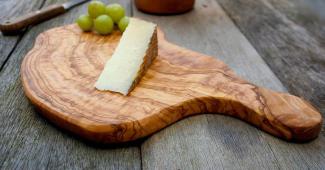 This is a story about trusting a stranger, being a little brave, and being honest. It is also a story about how I rediscovered cheese. The main story takes place in a medieval town in south/central France. It was the summer of 1992, and I was there with my Mom on a mother-daughter adventure. Before you start imagining the two of us as wild women, cruising through cobblestone streets on pastel colored bikes, a fragrant bouquet and a crunchy baguette leaning out of our bike baskets, and bright red scarves flying out like flames from around our necks, I need to tell you it wasn’t that sort of adventure. This was a much more tame, much more rural and quaint kind of trip. To be sure, the most daring thing I did on the trip was to try to use a European public port-a-potty (Never Again!). 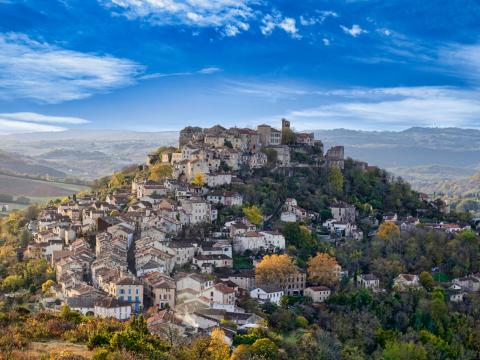 Around the middle of our trip, Mom and I were sitting at a picnic table on a grassy rampart in the fortified village where we were staying. Back in the 13th century or so, the space offered a fair vantage to see approaching marauders and the like, but now it offered just a really nice vista of rolling, green farmland, with glimpses of a swollen, brown river snaking below. It was warm, and we were in between day-trips to see this little museum or that little town. There were feral cats all around -- sneaky, aloof, and obviously well-fed little buggers, who seemed to be enjoying a little bake in the afternoon sun about as much as we were. We also shared the space with a couple of older guys, probably in their 50s or 60s, who, we could tell by overhearing their banter, were British. Perhaps they heard us conversing in English as well, because one of them hailed us with a “hiya” and we exchanged small talk over the small parcel of dry grass. A few minutes later, one of the guys got up from his table to approach ours. I seem to remember he was wearing shorts, a straw hat, and a short sleeve shirt completely unbuttoned, exposing his round chest and belly. In one hand he carried a small wooden board with something on it wrapped in plastic, and in the other hand he held a pocket knife. 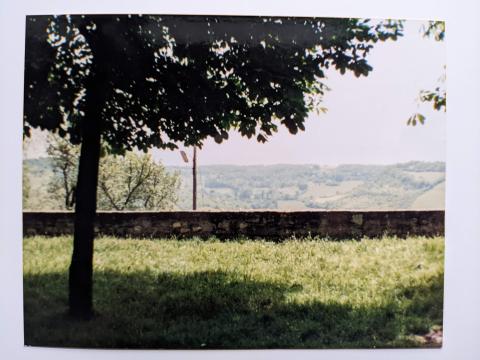 “Would you like to try some of this local cheese?” he asked, holding out the board to us. My mom declined politely, and when I followed suit, the man asked, “Are you sure?”

“I don’t like cheese,” I said, speaking truthfully and hoping to end this semi-awkward encounter.

I just sort of shrugged at this, not knowing what else to say. This sort of refusal was becoming a bit repetitive for me on this trip. Despite it being socially acceptable to drink alcohol here at my age, I had already turned down wine, champagne, hard cider, and beer. I had also turned down other “adult-ish” delights such as oiled olives, sauteed mushrooms, and nearly any sort of food that I didn’t immediately recognize.

But cheese was especially easy for me to refuse. I had an unsatisfactory history with cheese in the 16 years of my life at that point. Sure, I enjoyed it on pizza, swirled in my Dad’s giant pot of macaroni goulash, and stretched between halves of buttered grilled bread, but I had never enjoyed it by itself. And never, ever cold. The last time I had tried cold cheese was many years earlier, when someone had made a bologna and cheese sandwich for me, using a slice of what I grew up calling “government cheese.” And this is what had turned me off from any cold cheese, and most cheese in general. 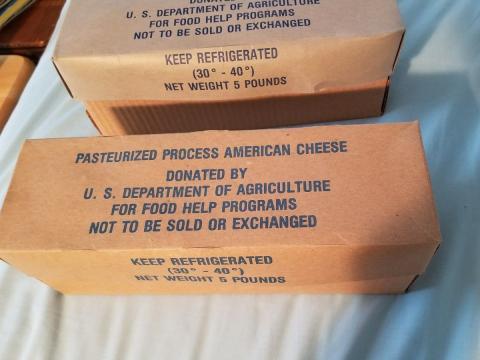 Every so often, when my brothers and I were little, Mom would bring us to a place downtown, maybe it was a church -- I don’t remember, and we went through a type of buffet line. We were given a brown paper bag into which we put grocery items that we were handed, one at a time, in a horseshoe shaped path that led back outside. In total we received a giant box or two of powdered milk, a coffee can sized container of peanut butter, and a 5-pound block of orange mystery cheese, packaged in generic cardboard with dark blue ink lettering. There were maybe other items, too, but those are the ones I remember. The milk was awful, but better when cold and mixed with Nestle Quik if we had it. The peanut butter was fine and, as a result, didn’t last long in our family of 6. The cheese though, was like if Velveeta and Barbie’s plastic feet had a baby. Day-glo orange, rubbery, and tasting vaguely of vomit.

This bologna and cheese sandwich someone had given me was not great for a lot of reasons, but the worst offender was the government cheese. After ferociously chewing the first bite of the sandwich, I surreptitiously removed the rest of the cheese from the sandwich and hid the slice under an old brown couch I was sitting next to. Food you were given was food to be eaten, so I had to be sneaky about my cheese removal. Fast forward a few weeks later to when my brothers and I were wrestling in this same spot, and when my head was pinned to the carpet by one of my brothers attempting a move straight out of Saturday morning Worldwide Wrestling, I spied the slice of cheese I had left there earlier. Still orange, still mostly intact, but now nearly rock solid. Seeing it like this, I just about threw up, but managed to distract myself by counteracting my brother’s move with one of my own, accompanied by some sort of imitation of the macho narration of the wrestling dramas.

So, no, I didn’t like cheese by itself, cold, or offered by a stranger in a foreign country for that matter. “I’m sorry,” I told the man. “I just don’t like it.”

He paused for a beat, and then, seemingly out of the blue, said, “What’s your favorite kind of car? Your dream car.” 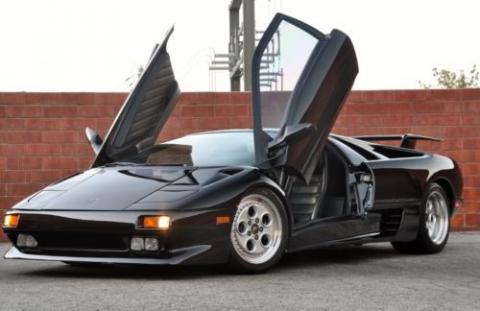 “Right,” he said without hesitation. “I will buy you a black Lamborghini Diablo if you don’t think that this is the best cheese you’ve ever had.”

I quickly reevaluated this guy. Was he some sort of millionaire dressed as a tipsy tourist? Did he live in this quaint medieval town? Did he own it? Who could make such an offer? Would I actually want to own a Lamborghini? Did I like black more than red? What about silver?

Before I went too far down the rabbit hole, I agreed to his offer, and reached for a small cube he had cut from the larger block of cheese, which he held out to me once again from the small cutting board. The cheese wasn’t orange, but a pale cream color, and it had a dull rather than shiny surface. There were no strange bits of anything in the cheese, no hint that this held the blue mold my mom preferred in her cheeses, and nothing else that might make me renege on the deal. So I ate it.

It had a delightful texture somewhere between creamy and crumbly, and it seemed to melt a bit in my mouth, not like a goo, but like ice cream. It was sweeter than I expected, with notes of almond, maybe wine, and a hint of smoke. Actually, I don’t remember at all what it tasted like. But I do remember actually enjoying it, rather than simply not disliking it.

And, truthfully, it was the best cheese I had ever had.

“That is the best cheese I have ever had.”

Satisfied that he was right, and seemingly unfazed that he didn’t have to help me buy a ridiculously impractical hot rod, the man offered the cheese again to my mom, who took a piece this time, offered it again to me, which I accepted again, and then tipped his hat to us and rejoined his companion. 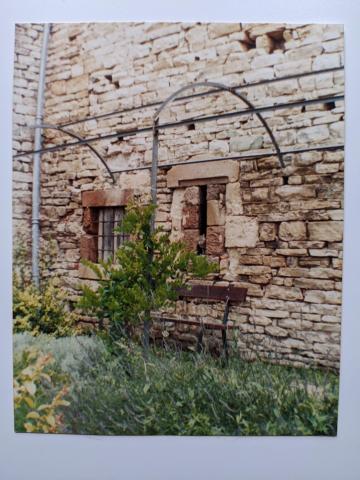 Since then, over the last nearly 30 years, I’ve probably had even better cheese than that small bite of “Lamborghini defeating,” French, whatever it was. I lived in Wisconsin for nine years, where, as my tastebuds continued to mature, my cheese tasting repertoire grew exponentially, where it was almost illegal to go too long without eating cheese, and where I came to appreciate cheese pairings with bread, wine, chocolate, crackers, cured meats, and fruit. I now spoil my own children with what we call “fancy cheese,” savoring crumbling chunks of Irish-style, aged, white cheddar with slices of honeycrisp apples, creamy dill havarti with flaky rye crackers, and complicated, small batch cheeses from local artisans who tout more flavors per bite than most of our complete meals.

I hope to go back to France someday now that I’m not just willing but eager to sample the local fare. I would more sincerely relish strolling an outdoor market, scrutinizing over which small parcels of cheese to bring on a picnic, and from which local winery to patronize. Perhaps Matthew and I would spend a month or a whole season there, getting to know a certain place more intimately, putting our high school French to task, and routinely spending afternoon siestas in the shade of a tree on a grassy, medieval rampart, as we listened to the chatter of American tourists a few picnic tables away.