Are these papercut pieces hand cut?

Cut paper artwork is amazing! Do you cut everything by hand?

The short answer is: No. I used to, but not anymore, and yet there's still a lot of "by-hand" work that goes into everything I make.

Slightly longer answer: Not everything, but some are still mostly, if not entirely, cut by hand. If you're looking for truly one-of-a-kind, completely hand cut works, then look into a couple different categories in the shop. First, there's the "Topo Cards" in a variety of colors and boxed sets, where each layer of every single card is hand cut in a unique depth-like design. Then, on the other end of the price and complexity spectrum, there's the "Imaginary Islands" pieces that feature 9-luscious layers of entirely hand cut, uniquely imagined ocean oases. The Retro Plants pieces and cards as well as the Googie cards are mostly hand cut as well. For those, I have the machine cut the top/white layer, and then I hand cut all the colored layers. Everything else in the shop is cut by a desktop machine (I use a Silhouette Portrait and a Silhouette Cameo), one layer at a time, and assembled by hand. You can read more about the entire piece-creation process in my Etsy feature from 2016. 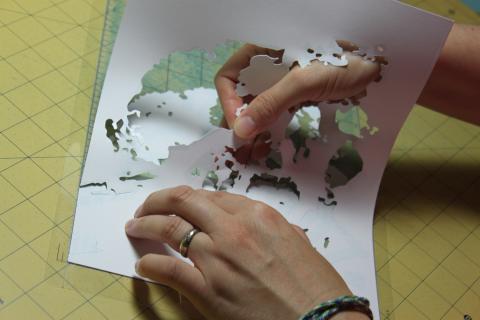 Longer story-style answer: When I first started cutting paper with my wee swivel blade (a now hard-to-find crafting tool called a "Blade Runner"), my shop was still in its infancy, I didn't make a lot of pieces, and I didn't have a lot of orders. I was making one-off works in hopes that buyers would be enticed by their uniqueness and find value knowing that their little card or work of art was unlike anyone else's. Eventually, orders picked up, and people began requesting "copies" of pieces and cards that had sold out. Over the next few years, this happened with more frequency, and, at the same time, I started fulfilling commissions for specific locations (The Great Lakes, San Francisco Bay, some little lake in the middle on Wisconsin, etc.). This was essentially the birth of Crafterall as you might know it today. I used to print maps of the lake, then cut the shoreline of that lake, turn it over onto a piece of clean white cardstock to use as a template, trace the shoreline there, cut it out by hand, add the first layer of colored cardstock, and then just eyeball the depths by hand from there, layer by layer, until the 5-layered piece was done. It got the job done, but it wasn't super accurate, and the templates would wear out. The other thing that quickly began to wear out was my poor right hand (I even wrote a blog post about it). I sadly realized that this was not a healthy, sustainable means of getting the job done.

Enter the first of my small family of cutting machines: The Craft Robo! Classified as a digital cutter plotter, or a desktop CNC (computer numerical control) machine, this was my ticket out of hand pain... and into the frustrating world of machinery. Basically, if I fed the Robo some hip, digital code, it would, through a dance of feeders and a replaceable swivel knife, cut my paper for me! At the time, this was still pretty new and there were so few other crafters using it AND talking about their troubleshooting triumphs. So the learning curve was steep, and I had to work through a lot of trials and experiments to get it right. As time went by, more people started using (and blogging about using) the Robo, and it was eventually replaced by the first version of the Silhouette machine. Silhouette also provided a marvelously user-friendly and free software to help create cut files the machine would read. Hallelujah! Now, over a decade later, I've got two different sized machines that I use regularly, and, despite being a couple of versions old already, they're still churning out decent cuts.

Here's the clincher: using the machines saves my hand from falling off, that's key, but it also provides two other important improvements over hand-cutting. First, using the same file to cut all the layers for each piece means that, even though there may be a wee bit off here and there, there is much greater consistency across multiple pieces made with the same design. The bespoke quality I tried to highlight in Crafterall's early days just wasn't (and still isn't) a big selling point, so I moved to creating a more predictably awesome work of art instead. Second, the cutting machine was way better at cutting intricate designs than my hand could ever be. This meant that I could create much more complex and visually appealing pieces that could capture just the right little notch in a shoreline, or render that wee waterway winding through a landscape without exaggerating the proportions. In addition, making more identical pieces also means being able to simply "renew or re-list" a piece in my shop, rather than write up an entirely new description and take new photos every single time I want to sell a piece, so it has streamlined and simplified that part of the process, too. In turn, this frees up more time to create new designs, make more pieces, and connect with more people about the lakes, coasts, mountains, and other special places that are meaningful to them.

Someone once told me that my shop was misleading, and that I shouldn't call my work papercuts, if I wasn't cutting the paper by hand. In response, I compared using my cutting machine to make these pieces as one might use a sewing machine to make a quilt. With both, there's certainly the assistance, precision, and speed afforded by the machine. And, with both, there's still a lot of fiddly work that simply has to be done by hand. There's still a lot of attention to detail, a lot of care for the process, and perhaps even a higher standard for acceptable quality. Today, I offer a bit of both in my shop. If you want a truly hand cut piece -- they're available for you. If you want a piece that more accurately depicts your lovely summer cabin lake and takes much less time to make, I've got you covered there, too.